Today in honor of blogger buddy Elizabeth Mueller’s release of her debut novel DARKSPELL- I’m supposed to finish the phrase ‘If I had all the magic in the world, I’d…’
However,
I don’t want to finish that phrase- for the simple reason that I feel I should use all the magic in the world to create world peace and harmony- enlighten all human, animal, vegetable and mineral suffering on this planet.  Stop the exploitation of natural resources.  Promote peaceful interaction with extraterrestrials.
But the truth is…
I’d probably use telekinesis to start coffee in the morning.  And then make it float to my bed so I won’t have to get up.
I’d fly places. Especially when grocery shopping.  Who needs to walk all the way to the other side of the store when you forget something?  I’ll just fly.  And when I only have two items to scan- I’d totally fly over people’s heads to get to the check-out counter before the dude with the over-flowing shopping cart.
Or maybe I’d make food replenish itself.  Especially Japanese food.  All you can eat sushi.  And lobster.  Every night. Then maybe I wouldn’t have to go grocery shopping at all.
I’d make my children’s voices mute (only on occasion).  With a wiggle of my nose their brain-popping cries of ‘That’s MINE!!!  She HIT me!!!’ will disappear in a flash and be replaced with…silence….aaahJ
Yes.  It is the ugly truth.  Which is probably why I have yet to be bestowed with magic powers.  Though it isn’t through lack of trying mind you.  I was one of those creepy kids who would try to bend forks with their minds and stare at unlit candles for hours.  My attempts at flying never really worked out to my benefit either, as you can imagine.
But I’m sure Mueller’s magic users of the Stormhold coven will put their powers to better use than I would!  Be sure to check it out! 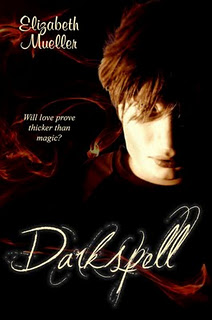 Review:
Winter Sky believes she is everything ordinary…until she is kissed by Alex Stormhold.  As seer of the Stormhold Coven, Alex is sworn to be Winter’s protector against the darkness that hunts her.  Violently thrust into a magical realm she always thought impossible, she stumbles upon a disturbing secret of her own.
Darkspell doesn’t fit into a typical YA genre box.  As a matter of fact, it’s one of the most original books I’ve read this year.  A richly woven drama unfolds as young Winter Sky meets two handsome and mysterious neighbors, both fighting for affection.
But one boy, the boy of her dreams—literally—has already won her heart.  But in short order her life is turned upside down as she enters the Stormhold world, a coven of magic users (I’m hesitant to use the world witch/wizard here.  This is really something very different) where she is being hunted by the Shadoweaer.  Suddenly everything is in jeopardy as she searches for her gift and fights to keep the boy she loves.
Elizabeth Mueller gives a great story, full of normal teen angst without tipping the scales to be annoying, she keeps us guessing, dropping nuggets for us throughout the story, but never tipping her hand.  Combine that with the fantastic use of illustrations that give it almost a graphic novel feel as we read, and this is easily a five star read.  I can’t wait to pick this up in paperback and you should too!  Mueller is a great addition to the YA world and I can’t wait to see what comes next from this talented writer!- YA Book Babes
Posted by Creepy Query Girl at 4:14 AM

Love you'd use magic to turn on the coffee. I'm excited for Elizabeth!

I think if I had all the magic in the world, I'd go with enough food in the world for everyone to eat 3 squares a day. I don't think people should be hungry.

You crack me up! But you're right...the "correct" answer would be to end world hunger and bring peace to everyone and make this a utopian world.

But I think if we're all honest with each other, we'd admit that...well...that's not what we'd do if we had all the magic in the world. Our intentions would be a little bit more selfish.

That book sounds great! My wish list grows and grows...

I'd force a parting of the traffic! No wait, my own private road. No one allowed on it but me.

The extent of my magic involes crossing my fingers for Elizabeth and her book, but somehow I don't think that'll be necessary! :)

Me? I'd share the magic with everyone because I couldn't stand the guilt of making a wrong, selfish decision.

Love your explanation of why you don't possess such power yet. lol And muted children, hmm... Makes one think, eh?

ooh! thanks for telling us about this book!
and the honesty?
refreshingly hilarious! :)

Book looks great. I'd probably put my car on autopilot and sit in the backseat. With a book. I hate to drive.

but if you had all the magic in the world couldn't you do both? Heck, I know I would! Of course, the question then is, which first? Hmmm...

ooo... Darkspell sounds fantastic. Best of luck to Elizabeth! And yep, you pretty much hit everything I'd do w/all the magic in the world.

Oh I hear you on the coffee magic! My Tassimo is pretty much the closest thing I've got to instant-caffein magic without resorting to "real" instant grounds...yuck.

This book looks great. Fun review and awesome intro. (PS - if I could, I'd bestow you with super powers...)

What a cool question to ask. I always wrestle with this one. Telekensis would be pretty cool.

I love Alex's response. Hahaha! But I also love how you could mute the whining kids on specific thins like fighting. Ugh!

Thanks for the shout out, Katie, you RoCk!

I'd give a Kindle to one and all! Yay for Elizabeth.

Oh beautiful CQG!!! I pray to the gods and goddesses bestowing super duper magic powers to give you plenty. Like NOW!! Yay!!!!

Awwwww so so happy for wonderful Elizabeth and fab book!!! Take care
x

Ah yes, there is the should...and then there's the truth. You've got some awesome truth's though---especially that thing about the coffee. ;)

HUGE congrats to the awesome Elizabeth!!!

Are you kidding? Forget flying around the grocery store. I'd have that stuff delivered.

I think the ability to fly would be cool, except I'm such a klutz I'm afraid I might collide with a bunch of birds something.
I think it'd be cool to have the ability to stop time, like that girl on that show from the 80s or early 90s. Then I could stop time in the morning and sleep in.

Oooooh, I love the mute button on my kids part. Only they'd be on mute most of the time. :(

The flying and telekinesis sound like fun, and I used to try to bend spoons when I was younger... but never got anywhere.

enjoyed your BIO. I am not there yet but I hear 'stalking the agent' is not uncommon :)

LOL. I'd love to fly around the grocery store! =)

I'll have to pick up Darkspell -- sounds irresistible. And I loved your ghost story from yesterday. Yes, that room was haunted! 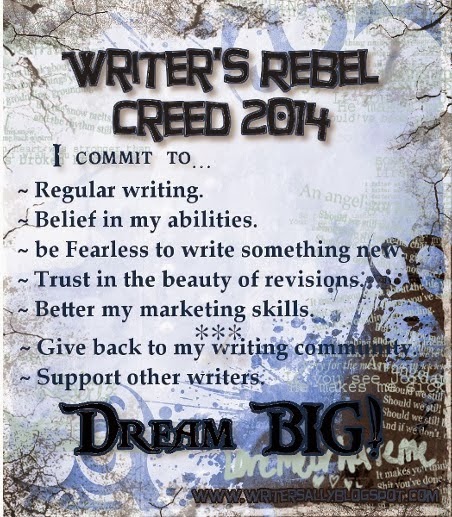